Being a Knight-Mozilla Fellow ruined my life. My fellowship ended three months ago; I still don't have a job, my wife and I haven't spoken in days, and none of my friends take me seriously. There is only one piece of advice that I have for anybody considering applying: ignore all the obvious reasons why this fellowship is a great opportunity and run away.

As you approach the end of your fellowship you are going to ask yourself many questions. Will Dan Sinker still love me when I'm old? Is it true that on your last day they brand your inner thigh with a hot iron that says "PROPERTY OF MOZILLA"? Where did I leave my FitBit?

The biggest one is going to be "where the hell should I go from here?" I'll give an example of what a fellow's immediate future can be by describing my current status as a functioning adult.

It's difficult to say what I do for a living. When asked, I usually give up and declare that I am a freelancer. In reality I'm…

I spent this week in San Francisco for the orientation of Mozilla's accelerator program, WebFWD. I'm here as one of three founders of Hyperaudio Inc., an nonprofit organization formed on behalf of my fellow fellow, Mark Boas.

Together, with a few others–including yet another 2012 Fellow, Laurian Gridnoc–we will spend the next year taking Mark's baby and turning it into a sustainable nonprofit ecosystem for remixable, transcribed video and audio.

There is a letter from Syracuse University’s Newhouse School sitting on my doorstep right now which offers a part time, remote faculty position. It is very likely that I will spend the next academic year mentoring students and creating a new set of resources to help them learn "how to make almost anything on the web."

Last month I worked with an amazing team at an OpenNews hackathon to build CivOmega. CivOmega makes it possible for people to ask questions about their government and get answers powered by open datasets and APIs. This month I'm in the running with 2013 Knight-Mozilla Fellow Mike Tigas to get funding to turn it into a real, contributor-ready open source project.

Last Friday I was in Miami to serve as a judge for the Knight Community Information Challenge. I read many applications from around the country that pitched ideas about how they want to solve a major community issue with digital tools. The month before that I spoke on a panel about newsroom innovation at the MIT-Knight Center Media Conference.

If nothing else, being a Knight-Mozilla Fellow means you can trick otherwise reputable organizations like The Knight Foundation into thinking you know what you're talking about.

I work part time to help startups build out their technology. This involves spending a few hours a week managing a team of developers and playing the role of architect and tech lead. Not every startup has to do with my immediate interests, but this is a nice way to keep things fresh. For instance, last month I helped make a button that rich people can press to give themselves more money.

Usually just mentioning my relationship with Mozilla is enough to cause people to swoon and faint, but sometimes I decide to go with vague threats instead. "I know some very important people on the internet. If you don't hire us, life could get very 'difficult'."

In addition to being a Knight-Mozilla Fellow for life, #km4lyfe, I'll be a remote 2013 RJI Fellow starting in September. My project is an effort to flesh out of my good ol' thesis project, Truth Goggles, an automated bullshit detector for the internet.

The 2012 fellows have started a collective brand organization called Shape Journalism. It's a loose group of makers who are willing to help media organizations by training, building, or just offering advice. For example last week Nicola Hughes, Mark Boas and I started laying out plans for a week long data viz training we're expecting to run in November.

Have a crazy idea related to journalism, new media, or technology? Apparently I'm the guy to talk to to get feedback! But seriously so many people have reached out to pitch ideas, and it has been wonderful to get to help out.

There are so many people getting into this space, and being a Knight-Mozilla fellow is eerily similar to being a leader.

Organizations reach out to me fairly regularly to help them build out a prototype, apply something I have made in the past to their mission, or otherwise write some code. It's always awesome to get to work on something you love and get paid at the same time.

The best part about not having a job that provides health insurance is that you can do whatever you want in between other work. This means learning new skills (like professional-level soundscaping) but it also means getting to continue to make things.

For instance I'm working on a forum that lets groups of people talk to each other in a closed community without isolating them. Basically you can share threads between forums (and be part of lots of communities), so you can have conversations spread to the most relevant places without getting inundated with the anonymous jackasses that we lovingly call “the general public.”

The Moral of the Story 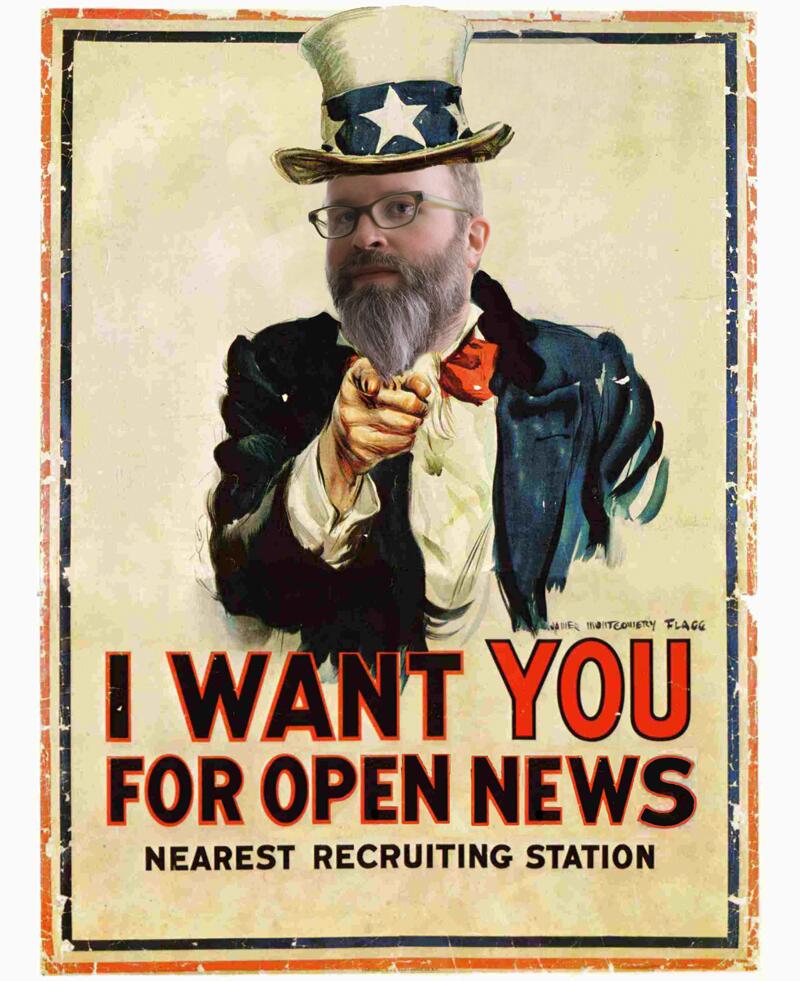 While it is technically true I don't have a job, I am here very much by choice. Being a fellow has set me up with a network of amazing people, who I still work with closely to build awesome things and participate in some badass events.

By the time you complete your fellowship you will be an unstoppable force of raw digital power. You will be oxymoronically established as both an outsider and an insider (so your perspective is priceless), and you will have had 10 months to show off what you can do. Following your passion at that point is as easy as breathing, unless you're a fish.

If your dream is a startup, you will come out of this with mentors, collaborators, and understanding. If you want to teach, you have an impressive set of experiences to show off. If you want a full time job, my other fellows have shown that you can absolutely do that too.

But honestly, seriously, not kidding, what are you waiting for.

How I got Twitter to count to 24
Moving the WebFWD