By Dan on October 5, 2011 in ATTN-SPAN, Meta Meta Project, OpenNews

I just got back from a trip to Berlin as part of the Knight-Mozilla learning lab (MoJo). Twenty of the participants from the previous round (the month long lecture series) were invited to spend a week in Germany getting to know each other while attempting to churn out some code for the rest of the world to see.

I arrived Sunday morning and quickly learned why it is never a good idea to get to a country before hotel check in. No recovery naps for me! The first thing I did was meet up with Saleem Kahn, Nicola Hughes, and Laurian Gridinoc and take a trip to the Bauhaus where I learned that people have been making things for a long, long time.

——–
Let me pause to quickly explain. I grew up, like most of you, using lots of things. When it came to making I was stuck with Legos and the like until one day I discovered programming and started making digital things with that. Fast forward 15 years and I’m at MIT taking How to Make Almost Anything and I say “oh awesome! Hardware isn’t just magic!” But once the course ended I, for the most part, reverted back to my comfort zone of software (still empowered with the potential to carve out circuits and molds, but not seizing immediate opportunities to utilize that empowerment just yet).

Bauhaus is the rest of the picture and got me excited about making again. The series of shops (I attended the one in Berlin) which closed with the rise of the Nazis, were basically buildings dedicated to modernist design (i.e. creating objects that are both beautiful and functional). As I walked around the museum I realized that I don’t have to make things that are super high tech and based on circuits to be making almost anything, I just have to be making things with a unique purpose. Hackable life for the win!

No time to worry about making things now (sponsor week and thesis proposal deadlines are looming), but I sure am ready to build stuff instead of buying stuff.
——–

After Bauhaus we went back to the hotel and I crashed and burned (and woke up just in time to meet up with Mark Boas and have some good old fashioned German Asian food since most things were closing up by then!).

The next morning was the beginning of what ended up being an INCREDIBLY packed four-day schedule of programming, talking, eating, walking, and sleeping. The hackathon (a term used to refer to these kinds of get togethers where people sit around and code) itself took place in a building called the Betahaus, located in Moritzplatz (aka “Makerplatz” since it is the hub of Berlin’s Maker community). The room was awesome – the fourth floor of a stark concrete building, full of tables, chairs, soda, lots and lots of wifi, and random posters of wildlife on the walls. Now that I think about it I wouldn’t be surprised if they hosted fight clubs on weeknights. 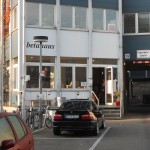 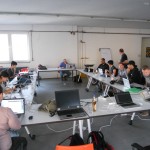 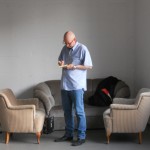 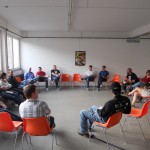 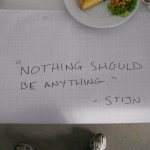 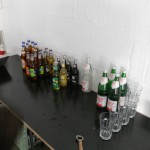 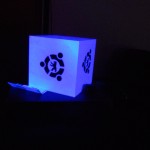 As the 20 of us pondered statements like “nothing should be anything” we started milling around and getting to know one another. Some people were designers, some were journalists, some were hackers, and some were mutts but sure enough project clusters slowly sprung up and by the second day people were nose deep in their laptops.

It was around this time that I realized that my project shared a very common need with most of the others: the need for metadata extraction from pieces of media! Thus was born the Meta Meta Project.

——–
I’ll write more about Meta Meta in another post somewhere on the Internet, but the basic idea is that there are a lot of tools out there which can extract information from images, videos, and text. For instance maybe you want to know all of the locations mentioned in a news article, or maybe you want to find all the words that appear in an image.

A lot of projects would benefit greatly from having access to this information, but to use the tools out there takes a fair amount of time setting up, implementing logic, and generally re-inventing parts of the wheel. Rather than having everyone need to become an expert in the tools, the Meta Meta Project is an API suite which will make it dead simple to put in a piece of media and get back the information you want.

By day 3 the news partners arrived – there were representatives from BBC, The Guardian, Zeit Online, Al Jazeera, and The Boston Globe. They were there to get to know our work and us, but more importantly they were there to get to know one another. The idea of open collaboration still seems to be a somewhat foreign concept among the professional news industry. This is a pity because there is surely a lot of room for mutual benefit and it would surely free up lots of resources for one another. (Hey news rooms! Hop on board the Meta Meta Project!)

There is so much more to write about but there is so little time so I’m going to wrap up with some quick points:

I want to end with my favorite memory from the trip (I stuck around for three days after the coding portion just to see the city). A small group of fellow stragglers and I were wandering around a part of Berlin that I would never wander around on my own. This was by no means a place for tourists. As we passed by doorways of punk clubs blasting out dance music we crossed a well-lit alley blasting a different kind of music. At the other end of the alley was a small band with a gathering crowd behind it. No vocals, just tones, and the energy slowly built. We got caught in the sounds and just watched as they wailed away and eventually climaxed. 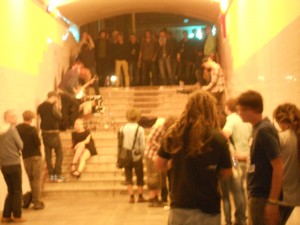 In the words of Chris Keller: if someone did that in Manhattan they would probably be carted away.