With my thesis complete I’m about to embark on the next phase in life, and in true Millennial fashion it will last about 10 months because job security is for chumps. I’m going to be a Knight-Mozilla Fellow (feel free to call me “Mr. Fellow”) working in The Boston Globe as part of the Open News project led by the Knight Foundation and the Mozilla Foundation.

My first full day was yesterday and I’m just about finished a post about my first impressions and lessons learned. Before I hit publish on that, though, I want to give a nod to the option I decided not to pursue: a PhD at the MIT Media Lab.

I ultimately decided not to apply to the PhD program at the Media Lab for now. This wasn’t easy (and doesn’t mean I won’t come back and apply later), but it came down to a few points: 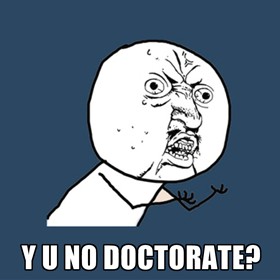 I’m not really a great academic. Don’t get me wrong, the motto of “Demo or Die” generally trumps “Publish or Perish” at the Media Lab, but this doesn’t change the fact that a PhD is ultimately an academic endeavor. When it comes to technology my natural inclination is to code and blog, not to design studies and write scientific papers.

I got a huge amount out of my time at the lab. Yes, the awesome ability of the Media Lab to jump start lives is actually part of why I’m moving on. In two years I feel empowered to create anything I want, I’ve redefined my understanding of the world, quadrupled my confidence, developed an amazing network of friends and connections, and become part of a wonderful community. I’m sure that four more years at the lab would continue improvement on all of those fronts, but I doubt that it would be nearly as saturated.

Four years is much longer than 10 months. Call me an opportunist but I’m married, and who knows where Lyla and I will want to be over the next four years. Actually it turns out we do know (Lyla got into RISD and starts her graduate program in September), but that isn’t the point. Locking myself into something for four years seems dangerous at a time when there are so many problems to solve and ideas to pursue. What would have happened if Luke just chilled out with Yoda for four years?

All of that being said, if I ever commit to a PhD it will be at the Media Lab. I already miss the place! Luckily I’ll stay an official part of it for at least another year as a “zero cost visiting researcher.” This means I don’t get paid, but I get to keep access to resources and have a good explanation as to why I’m still skulking around the hallways at night.

This leaves me here, living the Tolkien dream and beginning a brand new fellowship.