I just finished the second week of my fellowship at The Boston Globe, so at this point I have a stronger sense of how things are done and where I might fit in. Having just come from an academic program like the MIT Media Lab there is a tinge of culture shock (for instance, everyone already knows everyone and they use actual development processes), but I’m finally starting to meet people and learn the ropes.

At least I’m not the weird new guy wearing dress shirts that don’t really fit any more; I’ve upgraded to button down T’s.

Update: Matt Stempeck has told me “it isn’t your fault, but nobody in the world can pull off the button down T.” This is why I usually let the Internet choose my wardrobe.

Over the next ten months I’ll rotate between the three key technology groups at the Globe. I’ve given them battle-clad nicknames for the purposes of this post.

Each of these groups has a different set of responsibilities, constraints, and skills. It seems like the Chris’s group (R&D) has the most freedom but isn’t as likely to ship full blown features and systems that get used by millions. Mike’s team (Front Lines), on the other hand, pushes out code that will support the newsroom and the world. As a result they need to keep their eyes on reality — they can’t take as many risks.

Miranda’s (Special Ops) gets to be somewhere in the middle simply because of the nature of user-facing interactivity and the fact that many of their projects are “reusable one-offs.” For instance, if an interactive feature didn’t scale it would be very unfortunate, but at least the entire organization wouldn’t collapse in a fiery heap of paper. The same could not be said for the code that renders the front page of Boston.com.

I was jovially introduced to most people as the free developer (“You’re not free any more! Mwahahah”), although I’m hoping to do more than just hang out and crank out code. I’m coming in with some ideas in mind and a general mission, but narrowing that down into something actionable became a lot easier after seeing my fellow fellows this weekend at the Knight Civic Conference.

And so this is my hopeful breakdown of the next 10 months:

I see a parallel between the three groups I’ll be working in and those three major chunks, but I’ll be aiming to do it all, all the time. If you were at last weekend’s OpenNews hackathon at MIT you know that I’m feeling multithreaded. 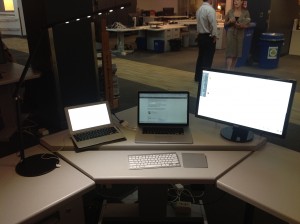 It takes three screens and two laptops to be multi threaded.

Information Ecolo-Tea
The Value of a Super Villain