You are about to hear an insider’s thrilling account of crashed markets, sinister minds, hunger, and inequality. For the tale to make sense you must understand a few things about the Media Lab.

Thing #1: there are about 150 students and 200 “other” people spread across 25 research groups, 3 floors, and 2 buildings. In other words it is possible for any given individual to completely ignore at least half of the lab. In an attempt to fight against anti-socialism, our community has a tradition called Friday Tea. A different group hosts the entire lab for an hour long hangout every Friday afternoon. This usually involves snacks such as cookies, chips, or whatever the group finds on foodcam that morning. Sometimes there are activities, but mostly there is tea.

Thing #2: my group, Information Ecology, is notorious for being completely filled with trolls. This reputation is deserved, which is reflected by the fact that when we host Friday Tea we use the opportunity to run social experiments on our peers.

Experiment A: The Occupy BTea (Lab)

It was November 4th and the world was protesting all around us. Our group’s crusty old PhD, Matt Hirsch, had just sent out an announcement for the Media Lab community:

The Information Ecology group is hosting tea this afternoon in the BT lab. Come occupy space with us at 4pm.

There will be 99% value brand plain vanilla duplex cookies, and 1% cake, which will be taken by the guest with the most expensive lobbyists.

The cake is not a lie. 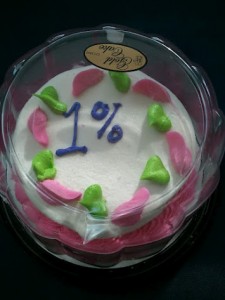 Matt had taken the lead on this week’s ML Tea, and instead of doing something normal like buying a bunch of delicious cookies, chips, and popcorn, he picked up some off brand vanilla Oreos (the kind that sucks all the moisture out of your mouth) and a single, tiny, personal-sized cake.

Only a few people would be able to eat something they enjoyed; everyone else would have to subsist on the horrible cookies. Since I unfortunately couldn’t attend, I asked Matt for some reflections. Below are a few of his insightful comments about the experience:

Q: What inspired the occupy tea?
A: I think it was Ron Paul who said, “let them eat cake.” As good as that sounds, we weren’t sure they deserved cake. So we bought some really cheap cookies.

Q: What do you think the result of the occupy tea says about our world?
A: It gives me hope that the cream really does rise to the top. Eventually, someone was bold enough to take the cake. She hoarded it all for herself and her friends, so the person with the best business acumen was rewarded, in tea as in life.

Q: What were the best reactions?
A: Of course, the aforementioned conquering of the cake was the most rewarding to witness. But I also took a lot of pleasure from watching the shame — real visible shame — from the cookie eaters. It was their own pitiful inaction that sealed their cake-less fate, and you could tell that they only blamed themselves. Perhaps this will serve as some sort of object lesson for them.

And so the experience was a perfect success. After some awkward confusion and pained cookie-eating someone took the cake and had a delicious feast among close friends in front of everyone. 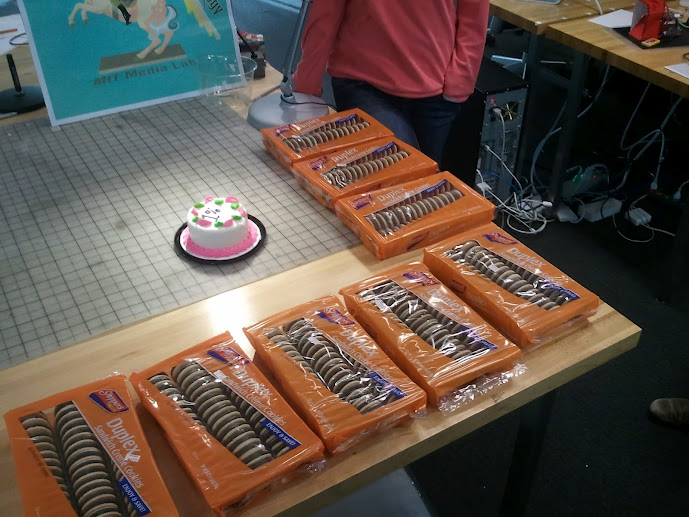 Experiment B: The Bubble Tea Bubble

The next semester rolled around and it was our turn to host tea again. We needed a theme. Our group loves bubble tea (sweet iced tea with tapioca pearls, also known as “Boba” in some strange places), and we wanted to share it with the lab. Unfortunately that stuff is expensive, so we couldn’t possibly buy enough for everyone. Luckily we also love puns and mischief. That stuff is cheap.

There was some email back and forth:

Turns out we’re hosting tea tomorrow, I knew that was coming up… Anyone want to do anything special? Honestly we *should* be hosting bubble tea, but that’s expensive so I assume we won’t. We could buy some actual bubbles though (as in, people would spend all of tea blowing bubbles)

Matt:
Can we host a bubble tea in the sense that everyone invests heavily in tea, driving the market to unrealistic levels, and then crashing, thus forcing all attendees to take a second mortgage on their mugs just to leave the lab space?

Me:
Yes.  We need to brainstorm on this.

Matt may not have been entirely serious in his suggestion, but it didn’t matter. The high level theme had been decided. After some deliberation we hatched a plan. That plan became official soon after with the following announcement:

Remember when we left the gold standard?  That was a great time to invest.  Same goes for the Internet in 1998 and 2012.

Anyway, we have some great real estate we’re trying to get rid of in the BT lab this afternoon at 4:00.  Come join everyone for Media Lab Tea in the Information Ecology space.

There will be FREE BUBBLE TEA, delicious snacks, and a wonderful activities! 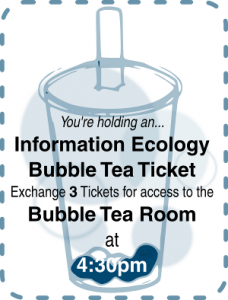 The scheme was simple. Everyone would get one Information Ecology Bubble Tea Coupon and access to the standard tea fare (we provided real food this time) , but in order to get access to the “Bubble Tea Room” (which would open 30 minutes into the event) you would need three coupons.

Thus we set the groundwork for an economic bubble, creating a market based on goods whose implied value was not necessarily related to actual value

Our group’s advisor, Henry Holtzman, presented the tickets to students, staff, and faculty as they trickled in. The rules were printed on the ticket and no additional instructions were given, so people had to figure things out for themselves. “In tea as in life.”

Within minutes our lab was converted into a busy marketplace bubbling with capitalist energy. Conversations were occurring left and right, people were making trades and striking deals. Some, who either didn’t care about bubble tea or simply didn’t trust in their ability to get tickets, just gave them up for nothing. Others made demands. It didn’t take long for someone to shout out “I’ll pay $1 for a ticket!” Matt and I just lurked on the sidelines and watched in awe.

Not everyone played by the traditional rules, of course. There were threats of ticket counterfeit from students who scanned the tickets and warned us of their capacity to flood the market with fakes. One person went so far as to physically steal the tickets from Henry. All is fair on the tea market!

At 4:30 it was time to open the doors to the Information Ecology Bubble Tea Room. We invited anyone with three tickets to the entrance, and a motley crew of about 20 people filtered from the crowd. Some had partnered together, pooling their tickets and agreeing to share whatever tangible rewards might come (of course only one would be allowed in). Others had fought and scraped their way to the top, achieving the status of three-ticket-holder through blood sweat and tears.

This was the finale. The bubble was about to pop, and Matt and I needed to make sure we wouldn’t be nearby when it did. We opened the door and rushed away as the investors began to enter (Matt was on crutches at the time, but he managed to move faster than me).

Inside the room, perched on a standing table, was a lone bubble tea. This was done for effect, as there were 9 more in the refrigerator of assorted flavors and sizes. The extra stash was found almost immediately, but it quickly began to sink in that there were still limited resources. Only about half of the VIPs would see a payoff on their effort.

Nobody was shocked by the market crash — like I said, we have a reputation — but we hope that everyone learned a valuable lesson about bubble economies. I think Henry felt a little bit bad about the whole thing.

Later, in the name of closure, we emailed the Media Lab community:

Thank you all for experiencing an economic tea bubble with us. We sympathize with those who have been affected in this unforeseeable market adjustment. Due to extreme supply shortages, a threatened glut of counterfeit certificates, and ongoing physical security concerns, we cannot offer compensation for community members left with unfulfilled holdings. Additionally, the bubble tea room has been closed to further community access.

Take heart in the fact that Information Ecology is too big to fail, and in anticipation of a bail out will have its own private bubble tea outing in the near future.