Lyla and I got home from the honeymoon on August 31st at 11:00 PM.  The next day was going to be intense: the plan was to finish packing the entire apartment into boxes, move those boxes into a Uhaul by 3:00, take the 6-hour drive to Boston, and unpack the truck into our new place in Somerville before it got too late so that I could wake up on time for my orientation the next morning.  Did I mention it was intense?

Packing was time consuming, but with the help of parents, Erek, Lyla, and I were able to hit the road on schedule… at 7:30!  Ok not on schedule, but at least we did it. 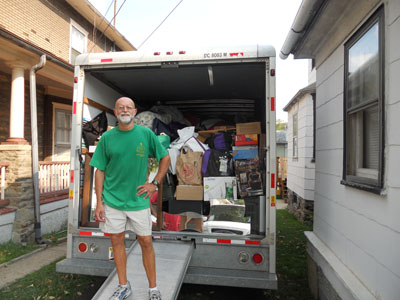 This is what the 14 foot Uhaul looked like about an hour before we completely finished. Mr. Alper was the master behind it all!

We almost rushed out before cleaning up but thank goodness my dad was there to step up and vacuum. 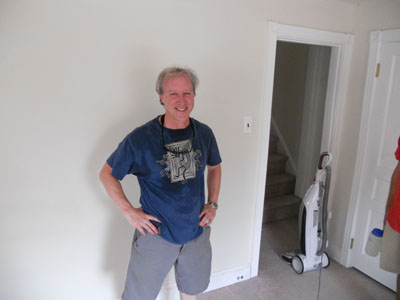 Visible proof that there was a vacuum involved! If only the previous tenants to our new apartment had a dad there to help clean up...

The drive itself was all sorts of fun — I tried to drive the Uhaul on the lower level of the George Washington bridge, which is exactly what you aren’t allowed to do.  Luckily they account for that sort of thing and we were able to get where we belonged before losing our roof.  Other than that and a few instances of getting lost, we got to the apartment just fine at around 1:30 in the morning.  Who needs to be well rested for their first day of work anyway?

The new apartment was very dirty, which was a bummer, and the walls still had nails and holes kindly left by the previous tenants (the landlord will be repainting them for us soon).  That was the bad news.  The good news was that they left us a refrigerator with two giant bottles of cheap champagne (fun fact: mimosas taste the same no matter how bad the champagne is).  It was a pretty classic scene by the time we finished putting what little we had in there…

Contents: 13 bottles of beer, 3 liters of champagne, 1 bottle of wine, 2 nalgine bottles (water), peanut butter, jelly, 1/2 a bottle of limoncello, 1/2 a container of orange juice, 1/2 a bottle of flat root beer. The root beer was the first to go.

The next day was orientation, which I was far more nervous about than I needed to be considering the fact that all I had to do was sit there with the 33 other first years.  At orientation I got my first assignment at MIT, and I’m proud to say that I managed to incorporate StarCraft II into it.

We had to write on the board something that we would be willing to teach — the idea being that each person would pick something to learn, causing us to naturally get to know a fellow first year student.  I was originally going to teach someone how to play Hysteria on the bass guitar, but unfortunately “teaching someone to play a song on an instrument” was used as an example of the type of thing they had in mind, which meant that EVERYONE avoided that lest they appear completely unoriginal.  Instead I offered to teach basic tactics and strategy in SC2 (I should have done the bass thing… whoops ;)).

When I got home I found that the entire van had already been unpacked by Lyla, Erek, and my dad.  They were supposed to wait so I could help!  After a lot of work, we managed to get the place to the point where Erek and I could set up our computers. 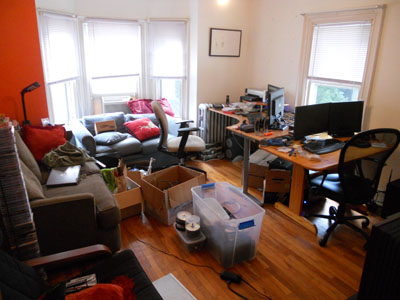 Yep, I think we're all set here (notice how both computer chairs are sliding towards the middle of the room. That's because the house is slanted). (Also note the orange wall.)

This has nothing to do with the move, but I think “Uninterested Squirrel” would be a great name for a band.

She was determined to catch a squirrel in Boston commons. We lost interest too.