Classes didn’t start until Wednesday, but as I learned during orientation we are not just students — we’re also employees working under our advisers.  My boss/adviser, Henry Holtzman, heads the “Information Ecology” group, which focuses on making information more naturally accessible in the physical world.  I highly suggest you check out the group website and look at their projects.  Some highlights:

There are dozens of other projects, but I’ll let you guys check them out if you want to since they are all listed and described on the group website.

On Tuesday morning I took the “T” (the Boston subway system) down to The Media Lab.  The lab itself is actually two buildings: the new one (which was first opened this past summer), and the “classic” one.  The new building is pretty much made of glass, which means all the walls are transparent and you can look into the lab space from outside.  The main rooms are very large and host about 4 research groups.  Our group happens to be located next to a glass wall on the 3rd floor that overlooks the lobby!

My first day was pretty low key, and it mostly involved meeting the other group members and cleaning up / reorganizing our lab space.  We came up with a really great design, which we call “the armada.” It’s a giant semi circle of desks that overlooks the rest of the “New” Media Lab.  It also creates a corridor to Henry’s office which means that anyone who wants to visit Henry has to walk in front of the entire armada.  Oh, and it also feels like the bridge of the Starship Enterprise.  We plan on setting up a heads up display against the glass to simulate battles with Klingon warships. 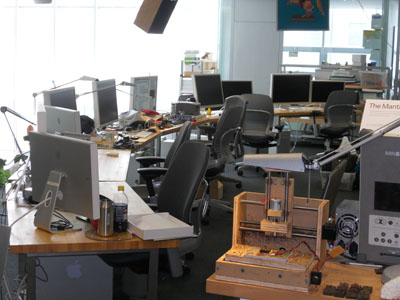 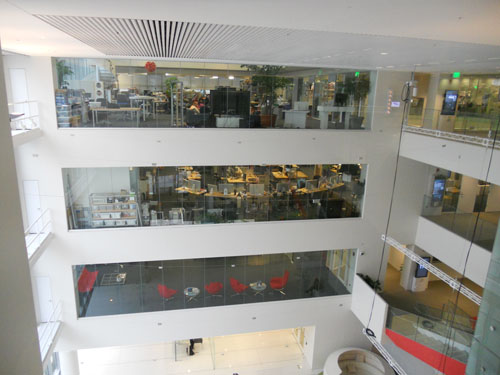 I want to end with a message that I found on the walls of one of the offices in my lab space:

A computer without Cobol and Fortran is like a piece of chocolate cake without ketchup and mustard.

The First 24 Hours of Boston
Ode to Food Cam